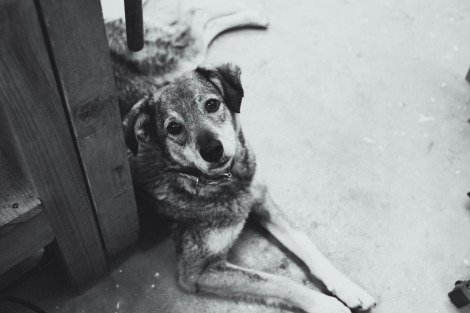 Those eyes. Black pools of liquid emotion, somehow devoid of hope and full of it in the same moment. Will you be my human?

As travelers, we experience the reality of homeless animals more than most – and there’s nothing quite so soul shattering as gazing into the eyes of a stray. The raw, undiluted compassion that claws at your gut and haunts you for days.

Exploring cobbled alleyways and narrow dusty streets, your eyes meet and part from hundreds of mangy, desperate faces. For a split second you consider sweeping them up in your arms – but something keeps you walking.

It’s a form of existential reality, like the difference between Skyping your family and actually being with them. You limit your awareness to two senses, hearing and seeing. You connect to their struggle but are not engaged fully or participating in the scene.

According to Dosomething.org, homeless animals outnumber people 5 to 1; a fact that leaves us living side-by-side with our ill-fated friends. The streets of Guatemala and other third world nations are home to thousands of heartbreaking strays that wander aimlessly, spreading disease and piercing your heart with their stoic dejection.

Unfortunately, with so many animals wandering around un-spayed or neutered, the problem is only getting worse. In six years, one female and male dog and their offspring can produce up to 67,000 puppies.

Seasoned travelers know these scenes all too well. We have trained ourselves to tear our gazes away, a defense mechanism to keep our feeble psyches from overloading on the brutal and capacious truth:

In light of International Homeless Animals day this August 16th, the International Society for Animal Rights (ISAR) and Mayan Families urges you to take action. We will be holding a spay and neuter clinic in recognition of the day and we hope to spay or neuter 10 stray animals.

Together, organizations, friends, and travelers around the world can lift this wretched veil of unaccountability and make a difference, one liquid gaze at a time.

In honor of our furry friends, wear orange this Saturday and share your greatest, quirkiest pet stories with everyone you know. Orange is the color of animal protection awareness and awareness is the key to making a change.


“66% of fourth grade girls say they like science and math. But only 18% of all college engineering majors are female.”

Verizon’s 2014 commercial raises some very good points. Women in America are victims of extreme gender stereotyping and it largely affects the choices we make later in life – including whether or not to travel.

Culturally, women are treated as precious snowflakes; sweet, delicate, and disastrously ill equipped to contend with the meatier struggles of life.

Whether a woman is walking on to a used car lot, pursuing an engineering degree, or planning a trek across southeastern Columbia, the reaction is always the same:

“Are you sure you know what you’re doing?”

An article on Forbes.com tracked the public outcry prompted by the death of a 33-year-old woman traveling in Turkey:

It’s a sad fact that things like this happen, but bottling women up is not the answer. Terrible things are likely to happen anywhere, even at home. According to the FBI, 80% of violent crime victims know their attackers personally.

When I was a child, one of my classmates bragged about an amazing weekend in NYC. Inspired, I went home and asked my mother if she could take me the following weekend.

She let out a small sigh and said, “Your father is busy, but maybe some other weekend.”

“It’s much too dangerous for us to travel to a big city like New York on our own,” she said.

This is the viewpoint that many of my friends and I grew up with; an opinion still institutionalized within my home community.

Every day, concerned friends furrow their brows and ask my mother how on earth she can cope with me living in rural Guatemala.

I am lucky to have so many amazing people in my life who care. But in a more perfect world, people would have confidence in my pursuits and not see every travel excursion as an opportunity for the real-life enactment of Little Red Riding Hood.

After hearing of the extremely low ranking Guatemala received on the United Nations Gender Inequality Index, the group is preparing to launch an annual woman-centered engineering expedition in conjunction with NGO Mayan Families.

For three months each summer, students will travel to Guatemala to utilize special engineering strategies to empower women and deliver long-term industrial solutions.

The project will give female students the opportunity to travel, experience a new culture, and contend with gender inequality issues both at home and abroad.

At just 18 years old, electrical and computer engineering major Mary Scherer is the pilot representative for the initiative, gathering all the information to approve funding for the trip while pioneering the educational practices that future students will employ.

She’s optimistic that the program will not only benefit the indigenous communities, but will also stand as a champion initiative for equal rights and the empowerment of women everywhere:

“Experiencing volcanic hikes, flooding rains, and an earthquake after only three weeks in Guatemala, I have realized that the world is constantly changing. But while teaching here in Panajachel, I have also realized that as a woman in engineering, I too am changing the world.”

Explaining a developing country to someone who has never seen one is like teaching a blind man to paint. He can hold the brush and imagine the colors, but the abstraction can never be actualized to intent.

It takes a certain level of visionary consciousness to confront the honesty that oozes from every cobble and crack. Quantifying impoverished localities means awareness—open eyes, open ears, and open heart. Awareness is not pity, sorrow, or sympathy. It’s an agreement to see and appreciate the world around you from outside the comparative lens. It’s quiet observation, nurtured by a respectful curiosity. It’s sharing in the enthusiasm, friendliness, and sociability expressed by those struggling under the poorest circumstances. Most of all, it’s feeling awed by a cultural community where poverty, trust, and goodwill thrive in tandem.

Unfortunately, this state of mind is not fundamental or inherent. It takes commitment and reflection, as well as a passionate respect for what lays beyond one’s understanding. It’s been my experience that most travelers remain disengaged, despite total immersion in a developing culture. They flit from one visceral encounter to the next with hasty unaccountability. Their days are scaffolded to fulfill one self-gratifying agenda or another; they do not hear, think, or see beyond the tragedy of foregoing first-world conveniences. Every exposure and observation, for them,is colored by their own perception of what’s right and normal.

Embracing twilight from a terrace in rural Guatemala, I witnessed one of the worst examples of the disenfranchised perspective. It was close to 9pm and most shopkeepers were rolling down their gates after a hard day of work. One booth remained open, manned by a girl about 12 or 13. Her frock, sandals, and emotive gaze were as downcast as they were colorful. As I studied her, a group of American tourists surged up the lane—three teenage boys ducked inside her booth and peevishly rummaged through her goods. They snickered, playing with their smartphones and shoving each other into her carefully arranged wares. None of the boys offered a glance her way, as her mouth sank into an expression of gritty fatigue.

Laughing, one of the boys stepped backward and tripped over a vase. The group turned to stare as hand-painted shards splintered across the pavement. For a moment, the boys just gaped in silence at the wasted terracotta. They looked at each other, then the girl. She didn’t make a movement. Her jaw quivered. Suddenly, one of the boys shrieked and took off down the street. The other two followed—they broke into peals of giggles, their voices echoing through the night air as they caught up with their group.

I dropped money on the table, grabbed the basket of rolls, and ran out of the restaurant. She was in the street, sweeping up the shards with tears rolling down her cheeks.

“Let me pay,”I said, shoving a wad of bills into her tiny hands.

She tried not to accept it, but after a few moments she gave in and took the bills from me. I offered her the rolls from the restaurant and she gingerly accepted those as well. We sat in silence for a few minutes, enjoying the moonlit tranquility. Her native language was Kaqchikel, a spoken language indigenous to the Mayan people, but eventually we were able to exchange a few ephemeral pleasantries in Spanish. I learned that she works every day from sunrise to sunset, earning money to care for seven younger siblings. Her one wish was to go to school, but for the time being her family needed her income to subsist. Despite it all, she was optimistic. Happiness isn’t conditional, it just is. In just a few minutes, she demonstrated more courage and heart than anyone I’ve ever met.

In this moment, all the tyrannical urgencies of life were extinguished and I could see things exactly as they were. For every act of blind disrespect, I hope that as we evolve as a people and a species, there is always someone watching. Someone who cares.